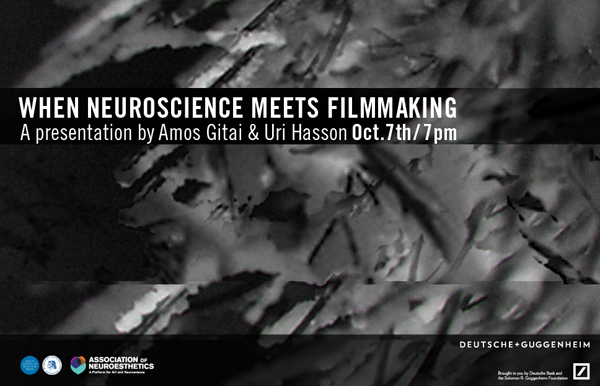 This second event of the Art and Neuroscience Series, curated by the Association of Neuroesthetics in collaboration with the Deutsche Guggenheim and the Berlin School of Mind and Brain (Humboldt Universität), focused on the theory of the moving image by presenting the work and research of the neuroscientist Uri Hasson and the film director Amos Gitai. Since the early days of cinema, it has been acknowledged that film has a tight grip on the minds of the viewer, yet only recently have we been able to record viewers’ brain states while watching a film. With new analytical tools such as a method of inter-subject correlation (ISC), used by Uri Hasson for assessing the level of control that a given film has upon viewers’ brain activity, we are obtaining new possibilities to bring together two separate, largely unrelated, disciplines of cognitive neuroscience and film studies. This new technology and research has opened the way for a new interdisciplinary field of “neurocinematic” studies. The film director and artist Amos Gitai shared the reasons of his choice to use the media of film to express his authorial vision. He will present for the first time in Berlin the short movie entitled “Berlin Jerusalem,” choreographed by Pina Bausch, where tableaux vivants of George Grosz’s and Ludwig Kirchner’s paintings are used to portray the post-World War I Berlin. This short film, part of a seven screen video installation recently presented in the Venice Biennale of Architecture, will open a discussion that compares the media of painting to moving images.

–Uri Hasson is a pioneering researcher into the relationship between cinema and the brain. He obtained both his Bachelor degree and M.Sc. in Philosophical and Cognitive studies at The Hebrew University of Jerusalem, and in 2004 he received a Ph.D. from The Weizmann Institute of Science, Department of Neurobiology. He later became a postdoctoral fellow at the New York University Central for Neural Studies and is currently a professor at the Department of Psychology and Neuroscience at Princeton University.

–Amos Gitai is a notable Israeli director and contemporary artist. His work has been the subject of major retrospectives, notably at the Centre Pompidou (Paris), NFT and ICA (London), Lincoln Center (New York), Berlin’s Kunstwerk, and at the MoMA of New York, among others. Following in his father’s footsteps he studyied architecture when the Yom Kippur War interrupted his studies. It was the use of his Super-8 camera while flying helicopter missions that led to his career as a filmmaker. Since then Gitai has been using filmmaking as a tool to understand historical events and to describe and focus on allegorical visions and metaphors.

Hasson´s Abstract – While the idea that some films can have a tight grip on viewers’ minds was acknowledged since the early days of cinema, there was no way until recently to record viewer’s mental states while watching a film. In this talk I will review a new analytical tool for assessing the level of control a given film has upon viewers’ brain activity. The empirical protocol involved measuring brain activity using fMRI during free viewing of films. Using a new method of inter-subject correlation (ISC) analysis we measures similarities of the spatiotemporal responses across viewers’ brains during the movie watching. Our results demonstrate that some films can evoke similar and widespread neuronal responses across all viewers, indicating a high level of control of these particular films upon viewers’ mind. However, this is not the case for arbitrary sequences of motion pictures, as other less well directed or edited films do not exert such control over brain activity. Finally, this tool brings together two separate, largely unrelated, disciplines of cognitive neuroscience and film studies, and may open the way for a new interdisciplinary field of “neurocinematic” studies.

Gitai´s Abstract – Gitai has been using filmmaking as the most congenial tool to him to inquire into reality, trying to understand historical events describing and focusing on allegorical visions and metaphors. Being aware that the idea of framing reality in cinema presupposes an act of exclusion and inclusion that is intended to channel the viewer’s gaze and attention in a predetermined and controlled manner, in this talk Gitai will describe the resons why he decided to explore the Middle East problems and complex themes as homeland and exile, religion, social control and utopia with the artistic media of video. He will suggest how much a movie represents a mind’s architecture, being possible to find behind every film’s sequence an intentional construction. In this presentation he will present his recent work short movie Berlin Jerusalem and Eden excerpt of the homonymous films of 1981 and 2001 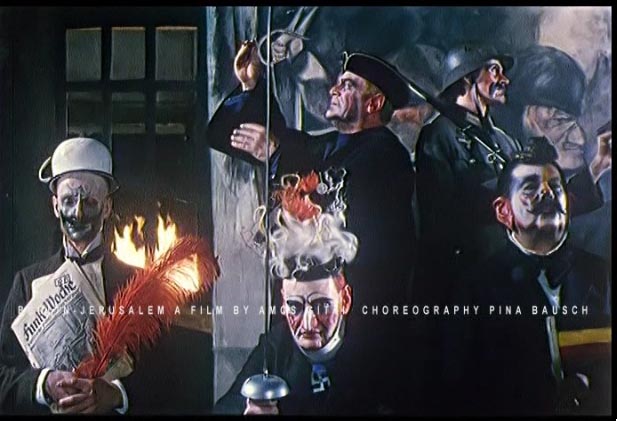